We have lost a great teacher and mentor, a great athlete and coach, a great husband and father, a great man and dear friend. 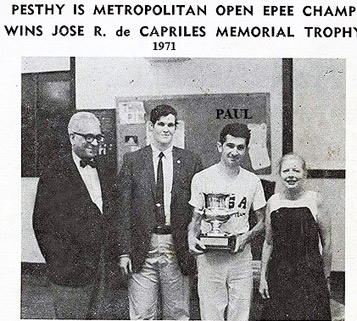 In his lifetime, Paul Pesthy was such a cheerful and invigorating presence that it was easy to forget what daunting tasks he set himself to accomplish in his 70 years. Always a sportsman, Paul became a great fencer and Pentathlete whose athletic career spanned five decades. Paul was USFA/AFLA national epee champion, representing the New York Athletic Club throughout his exemplary career. He won individual national championship titles in 1964, ’66, ’67, ’68, ’83, the most national epee titles in US history and was a member of 11 national championship winning teams for the NYAC. Paul was a  member of the U.S. Olympic fencing teams of 68, ’76, ’80   and a member of the U.S. Olympic modern pentathlon team in 1964, winning an Olympic silver medal and won world championship team bronze medals in 1962 and ’63. Paul was one of the very few athletes in history to compete in two different sports at the Olympic level.

In the Pan American Games, Paul led gold medal winning fencing teams in 1967 and 1975.  In collegiate athletics he was IFA epee champion in1964 and NCAA epee champion in 1964 and ’65 for Rutgers University and was elected to both the Rutgers and United States Fencing Halls of Fame. Those teams and medals just mentioned are but a sampling of the success he had as an athlete. As the great Jessie Owens put it, “…the medals tarnish and the diplomas fade but the friendships and memories endure.” His teammates comprise a who’s who list of the great American fencers and Pentathletes of the 60’s, 70’s and 80’s and it is a testament to the man that any of these greats will quickly acknowledge the contributions, leadership and fundamentally human qualities that earned Paul the nickname, “Papa.” 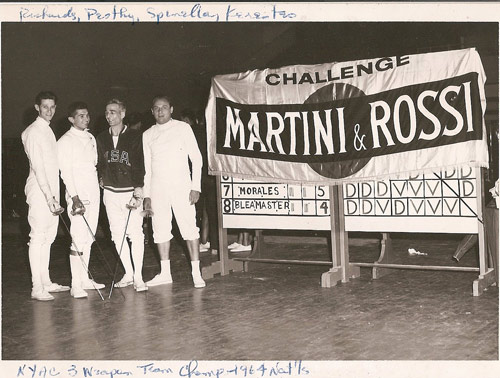 The Olympian professor Paul, earned a doctorate of philosophy in education and taught kinesiology at San Antonio College in San Antonio, Texas from 1980 until recently leaving to under-go treatment for luekemia.  His eager students often took as many of his classes as possible, including those already completed, because of his great influence on them. It was said that, “Students took to him like a magnet, he was likable, motivational, informative and knowledgeable.”

Yet these tasks were pursued with a lightness of spirit. Born in Hungary, his love affair with sport was fostered by his father, a Hungarian fencing champion. When Paul immigrated to America he joined the United States Army of his adopted country and was stationed at Fort Sam Houston in San Antonio, Texas, where his duty was to train and compete for the United States in the Olympic sport of Modern Pentathlon, which has a rich, significant military history.

When Paul retired from serious athletic competition following winning his last fencing national title in 1983 at age 45, he began a coaching career where his results arguably surpassed that of his own individual athletic accomplishments. As a  coach and sports administrator over 32 years, Paul was most notably the architect of a four year period where the United States won world championship gold medals in Pentathlon from 1997 to 2000, culminating in an Olympic silver medal in 2000 from Emily Deriel, who he coached from novice to Olympic Champion in only 18 months.

His loss will be felt around the world. For Paul had a freshness and optimism that won friends from  every nation as sport took him around the globe. Paul could be supremely quiet and stoic, a man of magnificently few words and a king of under-statement–though he could be disarmingly funny.

Yet his humor often had a purpose beyond humor. In the heat of competition, in often tense situations, his easy jokes offered reassurance to anxious athletes. They were evidence that one great heart at least remained sane and jocular. Paul has always exemplified true grace under pressure. Paul Pesthy knew his own mind. He had firm principles and ideas – and, if history is a fair judge, right ones. He expounded them clearly, he acted upon them decisively. As a professor, executive director, coach, father and husband, when problems or difficult situations arose he was never baffled, or disoriented or overwhelmed. He always knew, almost instinctively, what to do– and he did it. Whether it was challenging the United States Olympic Committee or building his own home, doing everything with his own, skill, wit and hands. 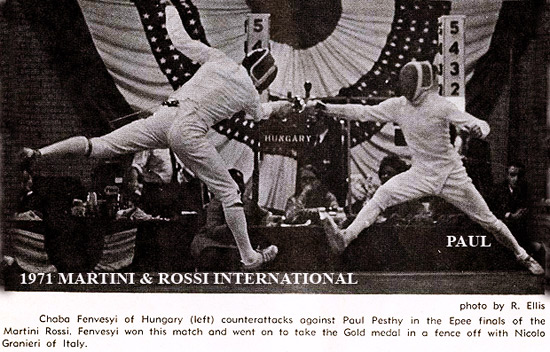 Paul’s life was rich not only in public achievement, but also in private happiness. Indeed, his public achievements were rooted in his private happiness. The great turning point of his life was his meeting and marriage with Carolyn.  We share her grief today. But we also share her pride – and the grief and pride of Paul’s children, Sabra and Christina. Paul was a man of heart. A kind and generous heart. Perhaps nothing was more typical of Paul’s generosity than how he spent his last precious minutes of life.

In his last days and knowing he was dying, he asked to see, “his kids” the name he gave to all the athletes he took under his wing as coach and mentor. Paul then sent them off to become better men and women because of his guidance–  as so many have gone before. Paul’s generosity extended to sharing some of his last moments on earth to comfort and guide. Such is the man.

For the final weeks of his life, Paul was clouded by illness. That cloud has now lifted. He is himself again.  We may be sure that his legacy will live on in his family and the many, many lives Paul touched and influenced for nearly three-quarters of a century. There is no doubt, in the words of Bunyan – that `all the trumpets sounded on the other side’. We here can only aspire in the darkness. But we have one beacon to guide us that Paul Pesthy never had. We have his example.